New Study: Before a doctor listens to your heart, ask if the stethoscope is clean!

About CuVerro › News › Read More
New Study: Before a doctor listens to your heart, ask if the stethoscope is clean! 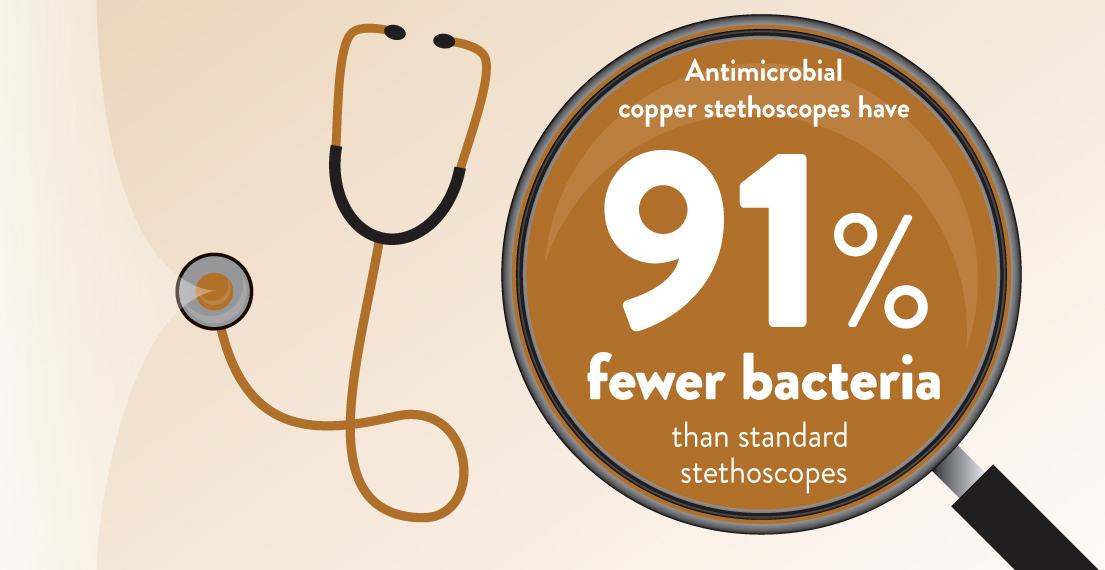 A new study ¹ from medical researchers reveals that 80 percent of the stethoscopes they studied were contaminated by high concentrations of bacteria, so much so that they present as much risk of transferring infectious bacteria as the hands of physicians after a physical exam.

Researchers discovered that stethoscopes made with traditional materials on the chest pieces, tubing, and diaphragms expose patients to an average of 127.1 CFUs (colony forming units of bacteria). In contrast, the stethoscopes made with antimicrobial copper exposed patients to an average of only 11.7 CFUs. The copper-alloy devices carried bacteria burdens 91 percent lower than standard scopes.

This difference could be significant in an age where patients and medical professionals are increasingly concerned about the incidence of transmitting bacteria that cause healthcare- associated infections, a problem that results in 99,000 patient deaths each year in US hospitals and leads to annual direct and indirect costs totaling between $96 and $147 billion.²

The study, led by Dr. Michael G. Schmidt, Vice Chairman of Microbiology and Immunology at the Medical University of South Carolina, pointed to evidence that there is only a one-in-ten chance that health professionals routinely disinfect their stethoscopes, making the effects of incorporating copper into the design of stethoscopes even more compelling.

The report noted there isn’t a “consistently applied routine of cleaning and disinfecting stethoscopes between patient encounters” even though they come in frequent contact with the unsanitized skin of patients and the hands, face, neck and clothing of health care workers.”

“Based on these trial results,” Dr. Schmidt noted, “we can say that adding antimicrobial copper stethoscopes to a healthcare facility’s bundle of infection control measures would likely help to limit the spread of infectious agents. In other studies, antimicrobial copper touch surfaces have been demonstrated to work in concert with existing hygiene procedures to help create safer environments.”

The stethoscope study was conducted variously at the Medical University of South Carolina’s Children’s Hospital, the Department of Emergency Medicine at the University of New Mexico, and North Shore University Hospital in New York.